The Main Admiralty building is an outstanding sample of Russian and world architecture, a major achievement of early classical art. The Admiralty is the architectural and compositional center of St. Petersburg. The city's three main thoroughfares converge here — Nevsky Prospekt, Voznesensky (Resurrection) Prospekt, and Gorokhovaya Street.

The building was assuming its present aspect for a whole century. The first Admiralty was founded in 1704 as a shipbuilding yard, to a design of Peter I himself. One-story clay-walled structures were arranged in the form of the Russian (letter N ("H"), in the south, the territory was fortified by an earthen rampart and bastions. An inner moat surrounded the yard. The building housed warehouses, workshops, and different admiralty departments; the yard held covered slips for constructing sailing vessels.

The new, stone building of the Admiralty was erected in 1732—38 to a design by A.Korobov. It was built in the same place and retained the former layout and the general outline. In the center, above the gates, a well-proportioned tower went up 72 m high, topped by a gilt spire which has remained there up to the present.

In the early 19th century, when the center of the city could boast of grand architectural ensembles, it became necessary to rebuild the Admiralty radically. The fortification structures were demolished. In 1806 — 23 the third Admiralty (the present one) was erected to a design by the great Russian architect A.Zakharov, to commemorate the naval power and victories of the Russian fleet. The grand structure (its main facade being 407 m long) consists of two n-shaped buildings — the outer and the inner ones; a canal used to run between them later filled up. The first housed administrative establishments, the Department of Marine and River Transport of Russia; the second housed industrial workshops. The central part of the main building is topped with a tower having a weather-vane in the form of a ship on its top, which has become the city's symbol. 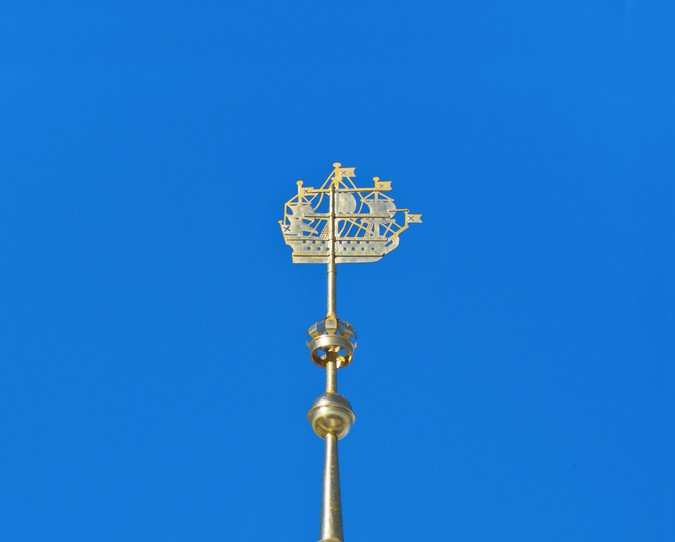 Zakharov repeated the motif of the arch cutting through the central part of the building in the facades of the two symmetrical pavilions facing the Neva and completing the eastern and western wings. The regular segmentation rhythm makes the Admiralty look like a single whole. The Admiralty building is an example of architectural and sculptural synthesis. Zakharov enlisted the best contemporary Russian sculptors with Th.Shchedrin at the head. The main high-relief, The Establishment of a Fleet in Russia (sculptor I.Terebenev) in the tower attic, is linked with the raison d'etre of the building—navigation and shipbuilding. The relief represents Neptune, who is handing Peter I the trident—a symbol of power over the sea. The lateral parts of the relief are filled with the figures of Tritons and Nymphs engaged in the shipbuilding works or saluting the ships already launched. The sculptural decoration of the tower is vibrant and interesting. On both sides of the main arch, there are sculptural groups representing Nymphs carrying the Globe; at the corners of the tower, attic stand the statues of Alexander the Great, Achilles, Ajax, and Pyrrhus (sculptor Th.Shchedrin). The statues above the upper colonnade of the tower symbolize the four seasons of the year, four elements of nature, four main winds, there are Isis, the patroness of shipbuilding, and Urania, the Muse of Astronomy among them. Sculptors S.Pimenov, V.Demuth-Malinovsky, and A.Anisimov also took part in the works.

The new Admiralty building put up by Zakharov entailed big work on the re-decoration of the Palace and Senate Squares.

Shipbuilding in the Admiralty went on till 1844. Later only some departments concerned with the Navy remained in the building, and since 1925 the Admiralty houses the Higher Naval Engineering School.