Rostov's Metropolitan Jonah Sysoyevitch founded the Kremlin in the 17th century. Son of a country preacher, he was put in charge of the Patriarch's post when Patriarch Nikon fell into disgrace. No wonder he had his residence erected with such pomp. The proxy of the Metropolitan during the construction of the Kremlin and his residence was Rostov's mason Peter Ivanovitch Dosayev, and the builders who erected the complex were natives of Rostov. Thus, the Kremlin absorbed the local architectural traditions. 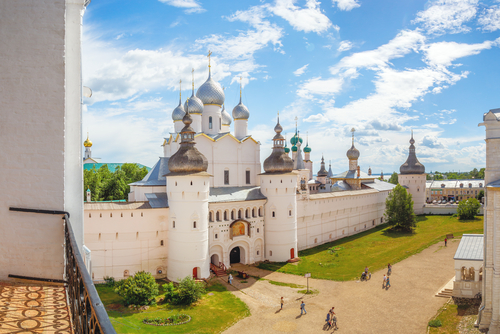 It took 30 years to erect this magnificent fairy-tale town. Its domes, covered with silvery wooden tiles, bunches of green and silver cupolas of the five-domed churches, long narrow red tent-roofs, and numerous chimneys, seem to float over the ground. Green four-sloped roofs with golden flags are seen above them. Tracery crosses with pendent chains beam over the churches. The complex of the Metropolitan's homestead with dwelling and household buildings, chambers for receptions, churches, cathedrals, surrounded by fortification walls and towers, is known as Rostov's Kremlin. It also includes the former St. Gregory's Monastery and the Assumption Cathedral with a belfry. Behind the walls of the Kremlin, the Metropolitan's garden was laid out. 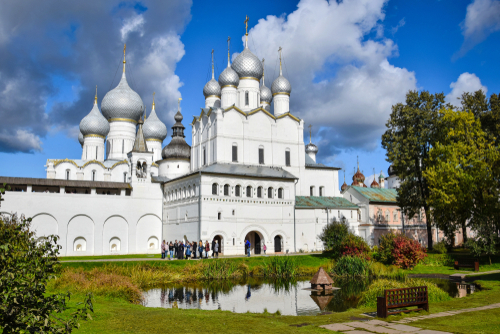 The Kremlin fortification walls have 11 battle towers. Their main purpose was to emphasize the magnificence of the residence of Rostov's Metropolitans. The towers have different shapes; four of them are barbicans. Two couples of the towers stand on the sides of the gate churches: the Ressurection Church above the main Holy Gate and {the Church of Johan the Theologian} above the gate, giving access to the Kremlin grounds from the Moscow road. Lake Nero comes into view from the observation ground on the Sadovaya (Garden) Gate Tower.