The Holy Trinity — St. Sergius Lavra is the largest Russian Orthodox Monastery, located in the center of the town of Sergiev Posad, Moscow Region. The monastery was founded in 1337 by St. Sergius of Radonezh. The monastery was divided into three parts — residential, public, and defensive. The Trinity Monastery soon became the spiritual center of the Moscow lands and the support of the Moscow princes. Here, in 1380, Father Sergius blessed the army of Prince Dmitry Donskoy, who went to battle against the Tatars. The monastery was favored by Russian stars who regularly made pilgrimages to the holy places of the Trinity-Sergius. Ivan the Terrible was christened the monastery. In the XVIII-XIX centuries, the Holy Trinity — St.Sergius Lavra was one of the richest monasteries in Russia and one of the largest landowners. 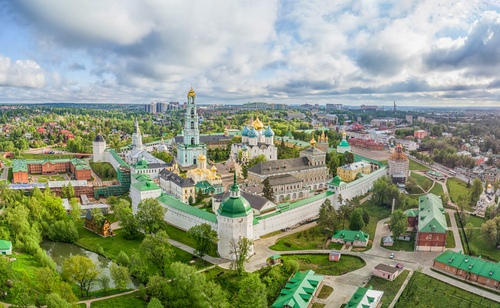 During the first years of the XX century, the monastery continued to construct new cells and buildings, and in 1905, there was organized the Lavra typography. After the Russian Revolution of 1917, in 1920, the Soviet government closed the lavra. Its buildings were declared museums or assigned to different civic institutions. The monastery bells, including the Tsar-Bell of 65 tons, were destroyed in 1930. In 1945, the Lavra was returned to the Russian Orthodox Church. On April 16, 1946 divine service was renewed at the Assumption Cathedral. Important restoration works were conducted in the 1960-70s. 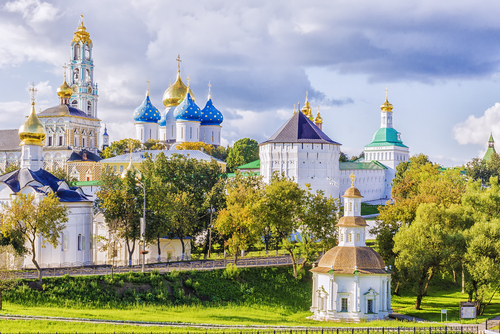 In 1993, the Trinity Lavra was included in the UN World Heritage List. Numerous monuments of the Trinity-Sergius Lavra were built by the best architects of the country in the XV-XIX centuries. The monastery ensemble includes over 50 buildings of different significance. The earliest building in the monastery is the white stone Trinity Cathedral, built-in 1422-1423 on the site of a wooden church of the same name, one of the few remaining examples of Moscow white stone architecture of the XIV-XV centuries. 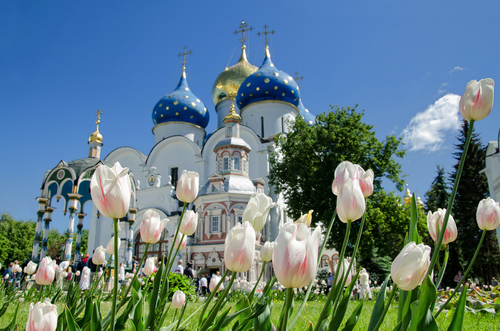 The architectural ensemble of Lavra was gradually formed around the Trinity Cathedral. The largest building of the monastery is the Assumption Cathedral constructed in 1559-1585 by the sample of the Assumption Cathedral of the Moscow Kremlin. One of the architectural dominants is the monastic refectory with the St. Sergius of Radonezh Church constructed in 1686-1692, revered as one of the best examples of Moscow baroque. The paintings inside the refectory date back to the XIX century. The carved gilded iconostasis of the XVII century in the St. Sergius of Radonezh Church was set in 1948. The shrines of the monastery — the relics of St. Sergius and other Saints — attract thousands of pilgrims from all over Russia. There are buried representatives of noble Russian families, many of Moscow and other bishops in the Lavra. Many treasures are stored in the sacristy — unique items of decorative and applied art, gifts of stars, and wealthy people to the monastery.  The Library of the Lavra features a significant number of manuscripts — there are stored the Russian chronicles of the XV-XVII centuries, unique examples of Russian early printed books, and historical documents.